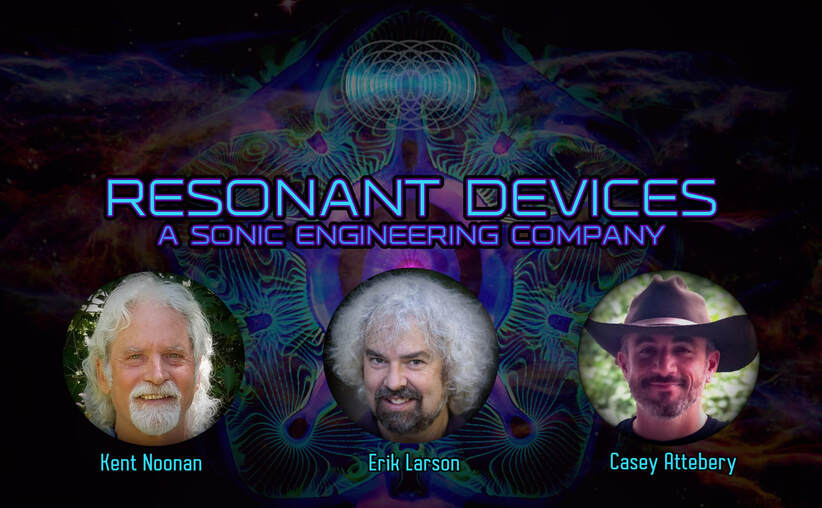 Who is Resonant Devices?

We are quite a crew with a diverse background of experiences and knowledge, and at the same time we have interesting and enjoyable overlap amongst our abilities. Together, we make one heck of a team, and you can be sure that we enjoy as much fun as we do science. Without further ado, here we are:

Erik Larson - CEO/Fabrication/3D Design - Erik’s educational background includes mechanical design engineering and material science at Wentworth Institute of Technology in Boston, MA. Erik is an inventor, design engineer, musician, instrument builder, and entrepreneur. Erik was ‘instrumental’ in creating the legendary Parker guitar and he is the co-inventor, designer, and builder of the original CymaScope. Erik is a fourth generation precision machinist in his family tool and die businesses, and his professional specialties include business development, business management, patent and IP development, product development, technology integration, systems design, and team building. He has a long track record of successes in the sustainable technology development field and over a decade of innovation in the field of cymatics. Erik’s technical specialties include biomimicry and phi-proportion design for device resonance, strength, ergonomic, aesthetic, material minimization, and form factor optimization. Further, he is experienced in 3D modeling, wave guide design, acoustic systems design, advanced methods of acoustic stimulation, and plasma reactor design.

Kent Noonan - Electrical Engineering/Lasers/Plasma - Kent is an Electronic Engineer who has been involved in research and development of a wide range of technology since 1977. He has developed many cutting edge electronic instruments that have been in production for years, working for large companies and small. His expertise spans all areas of design and manufacturing, lasers and optics, high performance electronics and tough industrial devices, alternative healing with light and electromagnetic frequencies, free energy devices and alternate fuels, plasma, cymatics, and structured water research. One of Kent’ s projects that shares both his genius and his heart is the work he did for The Whalesong Project. After a couple of years experimenting with home made hydrophones and kayak excursions, seeking a way to listen to the whale songs from the comfort of his home, Kent met the folks heading The Whalesong Project and helped them complete their webcast. He put in countless hours building and servicing the various generations of buoys so that people all over the planet can connect with the whales and hear their mysterious songs.

Casey Attebery - Software Engineering/Mathematical Physics/Graphic Design - Casey, otherwise known as Mr. E-Scholar, earned both a BSc in Mathematics/Physics and a Master’s Degree in Mathematics from Northern Arizona University, generating original research on algebraic projections of higher-dimensional graphs and polytopes. He is a published and cited mathematician with over 15 years of teaching at every level of education from pre-K to undergraduate mathematics courses with experience in colleges and universities, homeschooling, Waldorf and Montessori education, the Reggio Emilia approach, and discovery-driven emergent curricula. When Casey isn’t spending time teaching others through daily experience, he is deep in research and development in the field of cymatics and acoustics. He has been an independent math and acoustical physics research scientist for nearly two decades, studying concepts from quantum computation to cymatics and fluid dynamics. Casey first began experimenting with laser cymatics in 2012 when he found a video by Nathan J Wall on Youtube (you can see this inspirational video HERE); since then he has been teaching cymatics in just about every way imaginable from classes in geometry and physics to discussions in philosophy and art. Aside from developing applications for the results found in cymatics experiments, Casey also enjoys composing therapeutic music based on something he calls “phinaural” beats. Finally, in addition to graphic design, Casey also brings software design and coding to the team with experience in Arduino, MatLab, MAGMA, Mathematica, C++, Python, iOS, Android, HTML/CSS and Javascript.

Phew! What a crew we have! Together, we have over 100 years of combined technical and research experience which has helped us develop some tantalizing prototypes of neopixel light ring controllers with concentric ring lights, ready to use for any DIY cymatics scientist or artist. The Halo Light System, as we call it, is the world’s first hand-held RGB neopixel light ring controller allowing a user full customization over individual LEDs, currently with several models for financial accessibility. You can learn more about this device by clicking HERE.

While we enjoy the fruits of a new creation, we maintain our direction forward, aiming at releasing our fully-calibrated cymatics device called The Sonic Visualizer. Also developed with several models in mind, The Sonic Visualizer will be one of the most affordable, authentic, scientifically-calibrated and ready-to-use cymatics devices ever engineered. After co-inventing the CymaScope, Erik Larson set out to develop an accessible, at-home cymatics device that would help launch cymatics into mainstream science and pop culture. Now, with a community of cymatics artists and scientists actively working in the field, it is time to bring our Sonic Visualizers to homes and schools around the world!

Thanks, and happy learning,
The Resonant Devices Team (Casey, Erik and Kent)